US shrimp imports spiked dramatically in January just as the Chinese shrimp market was about to come to a screeching halt in response to the coronavirus COVID-19 outbreak, with producers of shrimp in India, Indonesia, Ecuador and Argentina all sending the US much more shrimp than usual.

Were the two events related? Despite the appearance, several shrimp importers and exporters interviewed by Undercurrent News don’t think so.

All three of America’s biggest traditional shrimp sources participated in the boost of imports to the US, NOAA’s data shows. 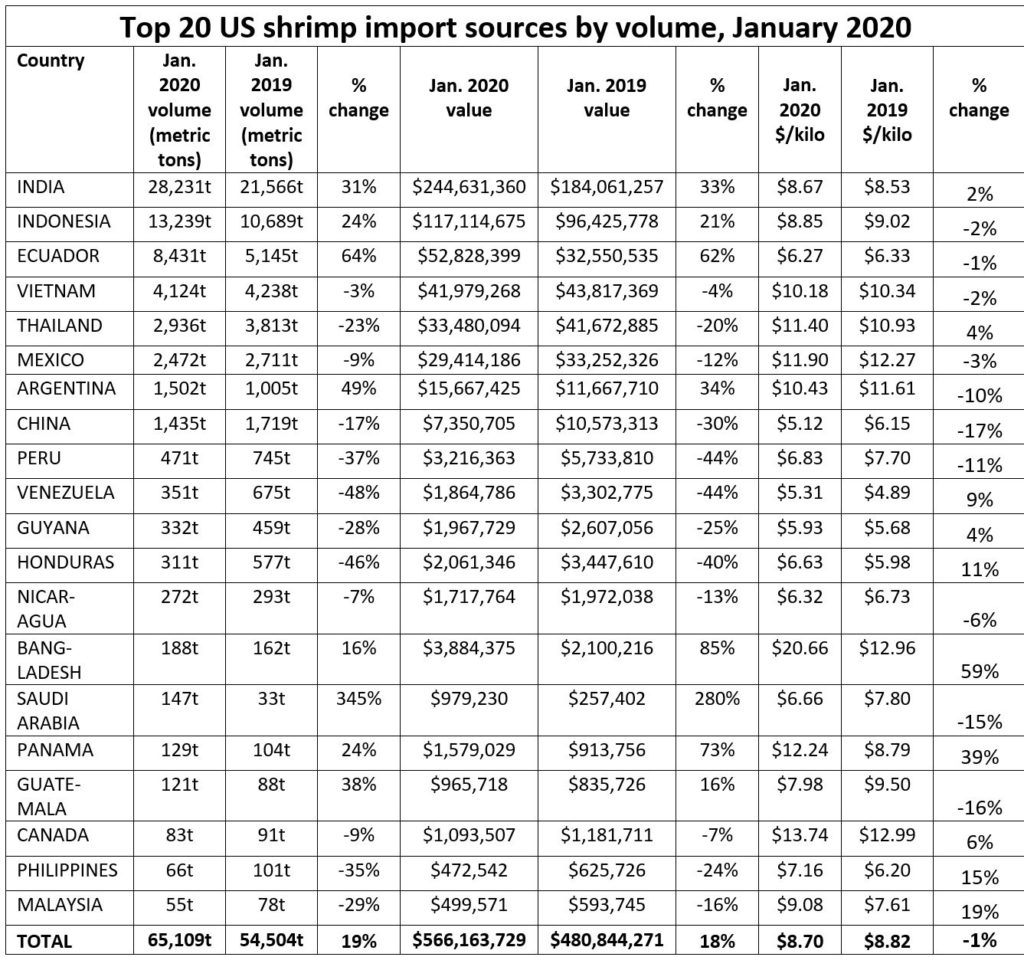 The January data does seem like a head-scratcher, Donelsen Berger, a longtime US shrimp importer and the senior vice president and chief sustainability officer for Lotus Seafood, in Seattle, Washington, told Undercurrent.

While October and November often shower the US with shrimp, January is not normally a big month, as is demonstrated by the chart below. Also, shrimp delivered to the US in January would’ve had to be ordered roughly two months in advance, well before the scope of the coronavirus outbreak in China could’ve even be fathomed, Berger said.

“There’s no way on the planet” the US bought that much more shrimp at such similar prices, he told Undercurrenton Monday, though he doesn’t doubt the accuracy of the NOAA data. “Did the Chinese buyers pull back [from buying shrimp] in December and just not talk about it?” he asked.

“The US import figures of January have absolutely NOTHING to do with [the coronavirus]. No connection whatsoever,” he asserted in an email to Undercurrent.

“From my perspective, there is nothing much to read into this,” Gulkin said. “Maybe some delayed cargoes arriving for the holiday season combined with stock replenishment as US sales have been relatively strong. This increase is a bump of imports that seems to have bunched up altogether but does not reflect any major change in the US market.”

Another source at a big importer of Indian shrimp to the US also said he sees no likely connection between the coronavirus in China and the big month of shrimp imports in the US. 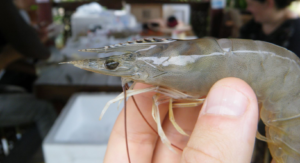 The source, who requested anonymity, said US demand was strong at the end of 2019, as the economy was in good shape, shrimp prices were reasonable and the sales of shrimp to US foodservice businesses were up. Also, companies were likely trying to get ahead of the Easter Lent holiday and the growing trend of strong summer consumption, he said.

Also, the source added, China employs a largely different set of shrimp suppliers, typically smaller packers selling mostly smaller shrimp than in the US, where much of the shrimp import business is program-oriented, he said.

As for the almost nonexistent price differences, the source said the price for shrimp is definitely down from a year ago, but India recently has shipped a lot of larger-sized shrimp, in the 16/20 to 20/25 range, which would’ve boosted the overall average. 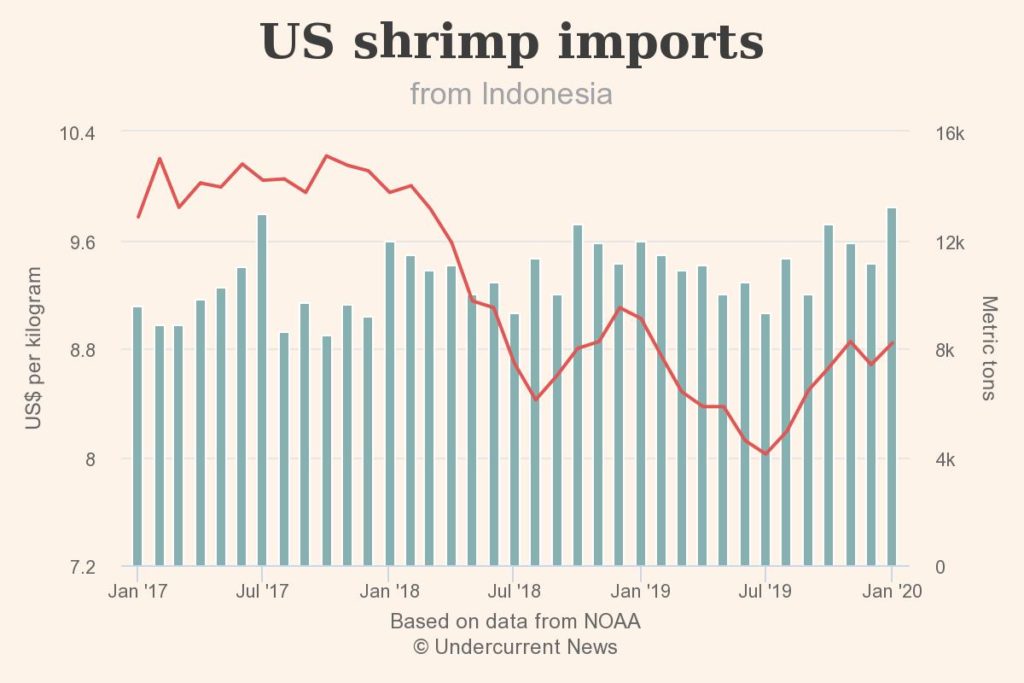 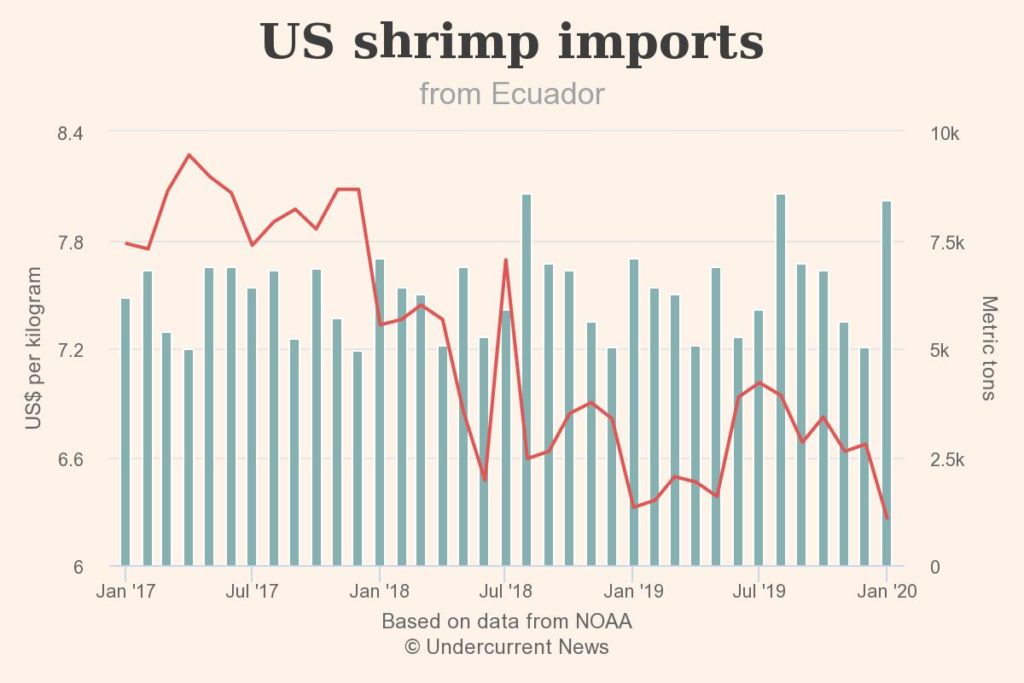 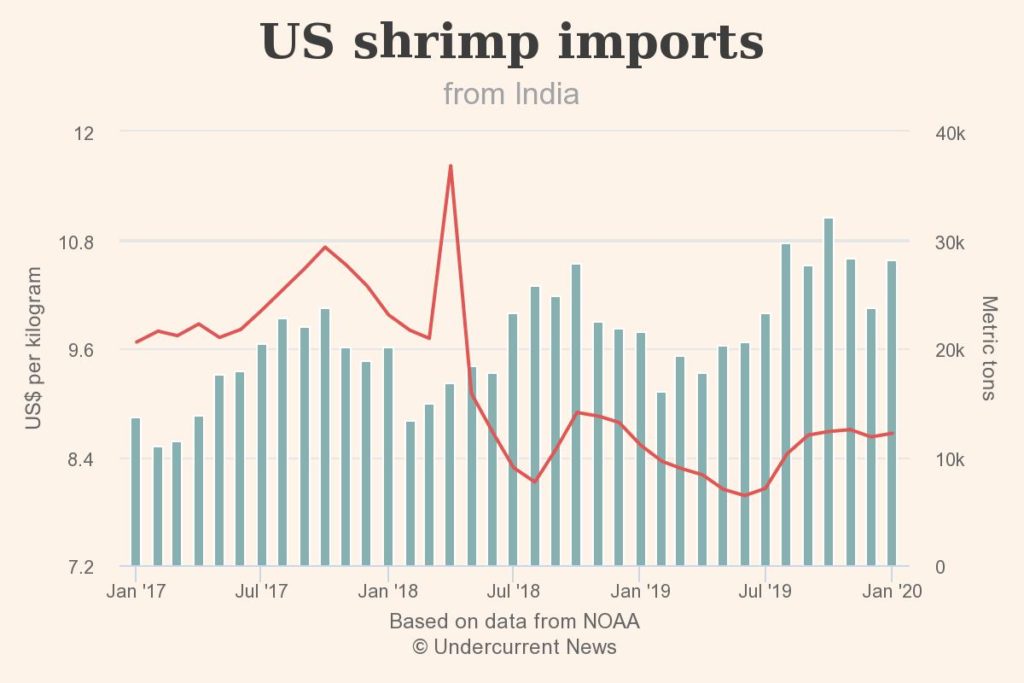 Will China hand shrimp buyer baton back to US?

China in 2019 became the world’s largest market for shrimp imports, having taken in 718,000 metric tons worth $4.4 billion, 462,000t more than in 2018, as reported by Undercurrent. The title came largely as a result of the drop in undocumented transshipments of shrimp through Vietnam. In December, China took in 97,000t of shrimp.

But then the coronavirus happened. As late as Jan. 13, the number of infected were tallied by the World Health Organization at just 40 with one death and nearly all in the vicinity of the Chinese city of Wuhan. However, as of late Monday, the coronavirus COVID-19 had sickened as many as 113,585 and killed 3,996 people worldwide with 70% of the illnesses and 80% of the deaths being in China where the virus started.

As hot as the Chinese market had been for shrimp exporters, it is now working to overcome trade infrastructure issues and a flailing economy that are expected to last for months if not much of the year.

“The reactionary unprecedented massive shutdown in China will lead to contraction in Chinese demand for seafood, leading to a supply glut in the global market,” wrote Pavethra Ponniah, vice president and sector head with Indian investment bank ICRA, in a recent report. 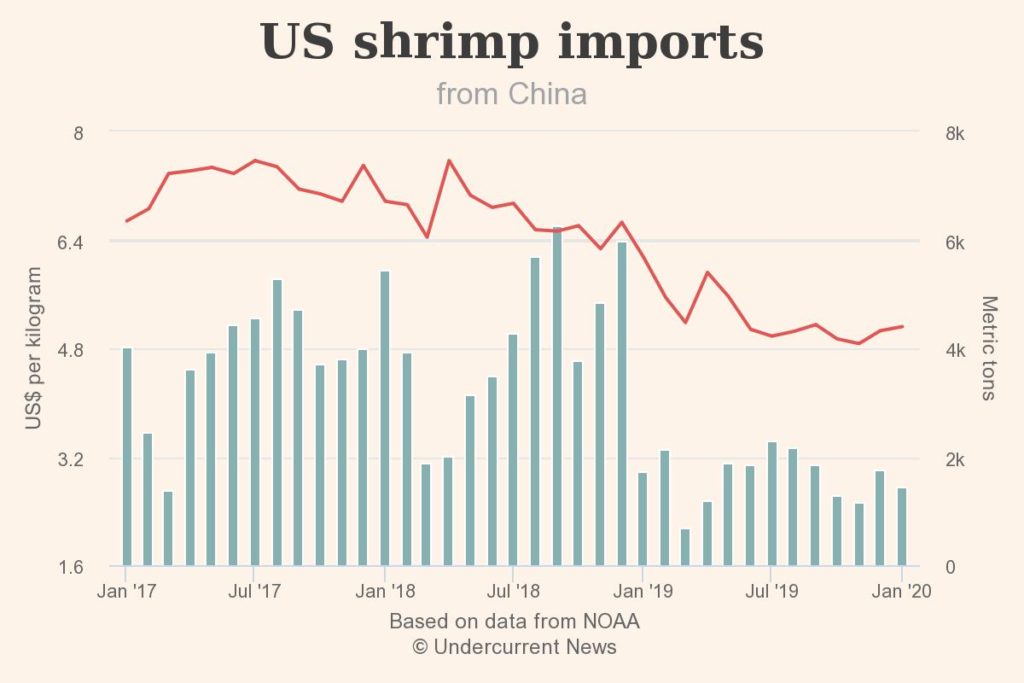 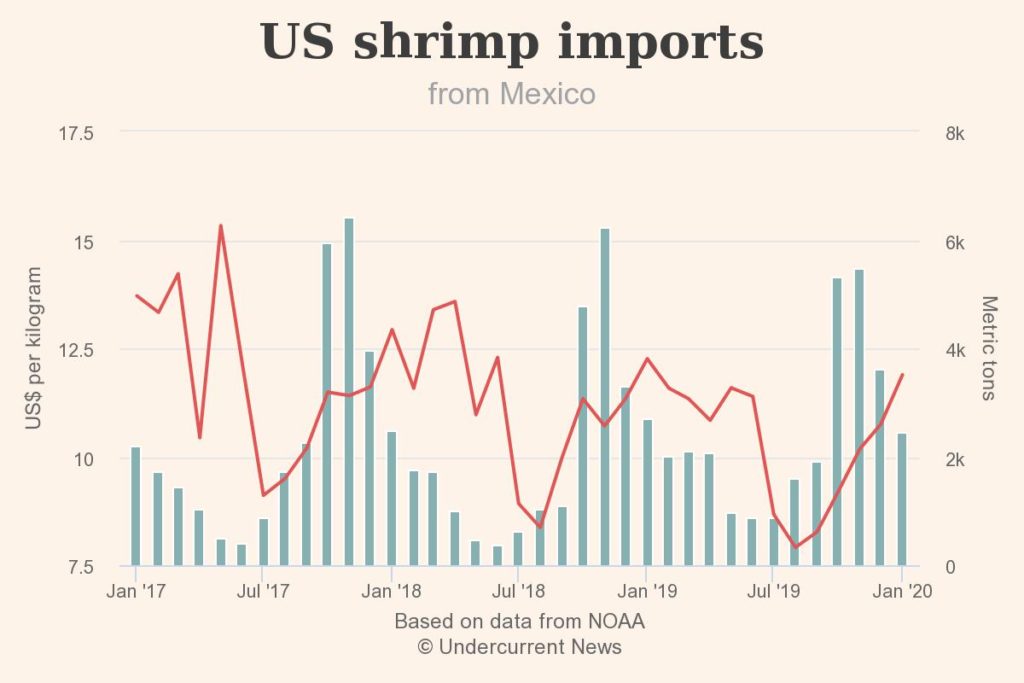 “Apart from the reduced demand, disruption in China’s internal logistics for unloading, storing and further processing, will play havoc with all types of seafoods, impact of which will be felt along the entire value chain, leading up to the farmers,” Ponniah said. “Port clearance for seafood containers in Chinese ports would be difficult in the current environment, effectively cutting off the supply pipeline temporarily.”

Multiple Indian shrimp processors and traders at the India International Seafood Show in Kochi, in early February told Undercurrent that prices were already dropping by as much as $0.50/kilo.  Almost simultaneously Ecuadorian shrimp prices dropped between 15% and 23% depending on sizes, sources said, though they were reported to be on the rebound late last month.

The US importer of Indian shrimp Undercurrent interviewed said he was concerned about the US market as the coronavirus has begun to show up there, and noted that his company’s executives have themselves curtailed travel. But, he added: “Right now we’re more focused on shipments and, so far, we’ve had no disruptions.”